Tyrannosaurus was a large tyrannosaur that lived during the late Cretaceous period .

Tyrannosaurus lived in what is now North America. It was one of the largest tyrannosaurs ever known to walk on this planet.

Tyrannosaurus was 36 feet long and with teeth the size of steak knives, it was a very dangerous predator. Although huge, these giants had useless arms that may had ben used as things to lift their body of the ground or, when mating to hold on to the females back.

The females were larger and stronger than the males, so when mating the males really, really had to be careful. Also, unlike their relative Allosaurus and Daspletosaurus, tyrannosaurus hunted alone while its cousins hunted in groups.

It was shown in the movie "Walking With Dinosaurs" that  it defended its young.  It was a tyrannosaur. It is the most popular and famous dinosaur.  Although once thought as the largest carnivorious dinosaur, it is now classified as only the largest tyrannosaur.

Tyrannosaurus was shown as the main character in walking with dinosaurs, Death of a Dynasty. It was shown guarding its eggs until they hatched. Then, it killed a edmontosaurus and fed it to its young. It was killed by a Ankylosaurus, while defending her young. The ankylosaurus broke the tyrannosaurus's leg and then all the dinosaurs were wiped out by the infamous metiorite.

Tyrannosaurus rex has appeared many time in many different movies because of its amazing fame and size. 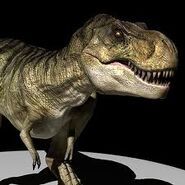 Add a photo to this gallery
Retrieved from "https://natural.fandom.com/wiki/Tyrannosaurus?oldid=9013"
Community content is available under CC-BY-SA unless otherwise noted.