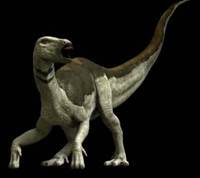 At 26 feet long, weighing about a ton and a whip like tail, tenontosaurus was a very daunting enemy, even for deinychus/terrible claw. Although it looks like an iguanodont, it's jaws actually put it in the hyphsilodont family.

Its only defence was its powerful, size, tail and legs, but its neck and body was un-protected.

It is also classified as an iguanodont, even though it is a hyphsilodont. Its name means tendon lizard. As said above, tenotosaurus was like a lost chain between the hyphsilodonts, and the iguanodonts, like Ouranosaurus, and the more famous, Iguanodon.

It lived during the late Cretaceous period.

Retrieved from "https://natural.fandom.com/wiki/Tenontosaurus?oldid=8982"
Community content is available under CC-BY-SA unless otherwise noted.