Spinosaurus was a huge/large theropod that could rival the size of the giant tyrannosaurs, such as Tyrannosaurus rex .

Spinosaurus was a giant theropod that was actually a pescovore and usually didn't prey on dinosaurs, it usually preyed on fish.

It had a large sail on its back like Edaphosaurus, Ouranosaurus  and Dimetrodon. Spinosaurus probably used it's sail to heat itself up in the morning when it was sluggish. Spinosaurus was about 51 feet long and was larger than Carcharadontosaurus , which was only 3 feet larger than Tyrannosaurus. Tyrannosaurus was actually only 36 feet long. Although it looks small in the picture above, It was actually hunting an 8 meter long sawfish called onchopristis.  Its sail was 6 feet long and its hands were very large compared to Tyrannosaurus. Spinosaurus is the longest dinosaur known. Now, however, based on recent data, most paleontologists believe that spinosaurus preferred to walk on four legs instead of being biped.

Although mostly a piscovore it would hunt land animals, like Ouranosaurus , if desperate for food.  It was a specialist at hunting in the water, but that didn't keep it there, as shown in the documentary, Planet dinosaur: episode 1, Lost world.  The spinosaurus was one of the biggest dinosaurs, that ever lived. It ate and caught fish, and other smaller aquatic creatures, like small pleisosaurs, with its very large and sharp claws. It had some special sensors on its nose that could help it locate prey without needing to see it.

Location and other animals in its area

Spinosaurus was found in north Africa in the late Cretaceous period, along with Paralitian, Carcharadontosaurus and Ouranosaurus. Although It lived in Africa, back then, Africa had tons of marshes were spinosaurus could hunt freely by swimming, it is very likely that spinosaurus were dinosaurs, that lived like Crocodiles. Although one of the largest predators there, ther were still dangers like the giant mososaur tylosaurus, a group of Carcharadontosaurus and other giants like sarcosuchus, (Flesh crocodile). Sarcosuchus was a giant 40 feet long and was an ambush predator like the modern day saltwater crocodile, but BIGGER! Carcharadontosaurus (Shark-Toothed Lizard) was a very strong rival for sipinosaurus, at 13 meters long and a gruesome killer, this carnosaur probably evolved into other sundry theropods like Gigantotosaurus. Tylosaurus (swollen lizard)  was one of the giant mososaurs that lived during the Cretaceous period. Although it may look like it was related to Liopleurodon, it was more related to modern-day moniter lizards, like the Komodo dragon, than it was to Liopleurodon.

Relatives during the Mezoic era

During the reign of the dinosaurs, spinosaurus had relatives, such as baryonyx, and suchomimus, who also had a crocodile like jaw, and lived during the Cretaceous period. even though they came a little bit before spinosaurus, they were a part of the spinosaurid family, and suchomimus had a tiny sail on its back, which migth mean that spinosaurus evolved from suchomimus.

Spinosaurus was the main character in Planet dinosaur, Lost world. It was shown scattering a herd of ouranosaurus, but they were not on its menu. It was later shown hunting a giant sawfish named onchipristis and killed several of them. It then swam down the river to look for more food. It then killed an African pterosaur and moved on due to its hunger. It then came across a Carcharadontosaurus eating an Ouranosaurus corpse. The Spinosaurus fended it off, but suffered a fatal bite to its fragile spine and died a couple of days later.

Walking with dinosaurs: Inside their world

Spinosaurus is one of the viewable dinosaurs in the app, it can be shown killing a suchomimus in the section, what were the dinosaurs?  Spinosaurus is also shown in the main menu of the app.

Although Spinosaurus isn't as famous and as popular as Triceratops or Tyrannosaurus rex, it is still sold at shops. The main reason why it is a little famouss probably because of the sail on its back. 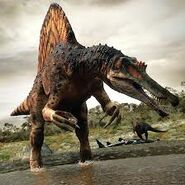 Add a photo to this gallery
Retrieved from "https://natural.fandom.com/wiki/Spinosaurus?oldid=8936"
Community content is available under CC-BY-SA unless otherwise noted.