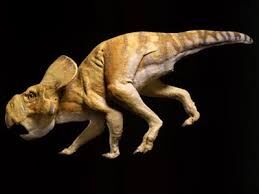 Protoceratops was a ceratopsian that lived during the early to late Cretaceous period. They look like Triceratops.

One of the earliest ceratopsians, protoceratops was like the rest of its family, except that it didn't have a horn. It lived in what is now, China. Instead of a horn, it had quite a very large bump on its snout, right before the beak, and that could have been used like a horn. It lived in the same area as Oviraptor, Velociraptor and many other dinosaurs.

Although tough, these ceratopsians were easy pickings for the tyrannosaur that lived there, like tarbosaurus. Protoceratops was also prey for Velociraptor. They had strong beaks, that could break a humans arm like that! It was one of the earlier ceratopsians. It usaully lived in the deserts of asia.  Its a very small ceratopsian. It lived in giant herds.

It is genus pocertopsidae and one of the earlier proceratopsians.

In Chased By Dinosaurs[]

Protoceratops, was shown in a walking with special, Chased by dinosaurs: The Giant Claw. It appeared when Nigel Marvin first walked through a valley to get to a forest. Then, finally appeared when a pack of Velociraptor attacked a lone male and killed him.

Community content is available under CC-BY-SA unless otherwise noted.