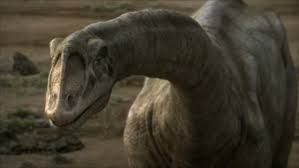 Paralitian is a genus of titanosaurid dinosaur that lived during the late Cretaceous period.

Paralitian lived in what is now north Africa, around the same time as the giants Spinosaurus andCarcharadontosaurus  although massive, these animals were actually herbivores, so they would not harm you on purpose. When a paralitian was full grown, it had no natural predators. When it was young, it could be preyed on animals like sarcosuchus, Carcharadontosaurus and sometimes,a Spinosaurus . It is the largest dinosaur that was found, in Africa. It was a mighty titanosaur, althugh smaller than its relatives, at 79 to 98 feet, in Africa, nothing could rival them, so they were safe once they were adults. It is pronounced as para-li-sh-ian.

In Other Media Edit

Paralitian appeared in the Planet dinosaur: episode 5, land of the Giants.

Retrieved from "https://natural.fandom.com/wiki/Paralitian?oldid=8701"
Community content is available under CC-BY-SA unless otherwise noted.