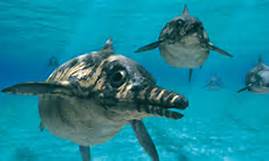 Opthalmosaurus was an ichthyosaur, and was related to Ichthyosaurus.

Like Ichthyosaurus, opthalmosaurus was very streamlined, and was shaped like a teardrop. It was a fish-eater, and was preyed on by animals like Liopleurodon. Its name means Eye lizard, because it had 10 inch wide eyes. It was about 4 feet long and the young were easy prey for a shark called Hybodus.

It lived during the late Jurassic Period. It lived alongside animals like Cryptoclidus. They also lived along side Hybodus too. The major predator of their habitat was the gigantic Liopleurodon.

They would hunt in packs or groups. They found this out because they were found in groups. Because of its large eyes, scientists, or paleontologists th ink that it was nocturnal and hunted at night.

Opthalmosaurus was shown in Walking With Dinosaurs, episode 3, Cruel sea. They were shown, not being very high in the sea's food chain, as they were only predators for the fish and squid they ate, while they, in turn hunted by Liopleurodon.

Retrieved from "https://natural.fandom.com/wiki/Opthalmosaurus?oldid=9003"
Community content is available under CC-BY-SA unless otherwise noted.