Iguanodon is a genus of large iguanodontid dinosaur that lived during the early Cretaceous period . 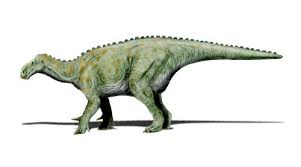 Iguanodon lived in what is now Europe in the early Cretaceous period. It was about 33 feet long and were peaceful herbivores. Although usaully shown being hunted by Tyrannosaurus, or T-rex, they actually lived way before tyrannosaurus rex. It also lived in Europe, while Tyrannosaurus lived in North America. They were also preyed on by animals like neoventor/new hunter. It used to be thought that its thumb spike was for a horn, but now they know that it was actually its thumb.

Iguanodon is a genus of ornithopod dinosaur that existed roughly halfway between the first of the swift bipedal hypsilophodontids of the mid-Jurassic and the duck-billed dinosaurs of the late Cretaceous. It was hunted by things way bigger than it. It ate plants, so it was a herbivore. It had very big feet but ran very slow. Its name means iguana tooth.

Iguanodon was shown migrating with a sauropelta in walking with dinosaurs: episode four, giant of the skies. It was a giant compared to sauropelta, a huge nodosaur, and they were being folowed by carnivores, like utahraptor.

Retrieved from "https://natural.fandom.com/wiki/Iguanodon?oldid=8811"
Community content is available under CC-BY-SA unless otherwise noted.