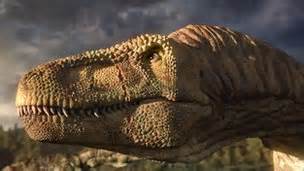 Daspletosaurus is considered, a "small tyrannosaur".

At about 28 feet long, daspletosaurus was a tyrannosaur, that lived like, and looked like Tyrannosaurus, but only a slightly smaller version.

Differences from other Tyrannosaurs Edit

It had teeth that were larger than those of its cousin, Tyrannosaurus and might of lived after, evolved from albertasaurus. Also, unlike tyrannosaurus, daspletosaurus was built  heavier, and probably hunted the armored dinosaurs, instead of chasing the fleet-footed hadrosaurs, like Parasaurolophus and Corythosaurus.  It lived during the late Cretaceous Period .

Daspletosaurus appeared in planet dinosaur: episode 3, Last killers. It was shown hunting Chasmosaurus, but failed, then it went with a huge gang of daspletosaurus and killed the poor Chasmosaurus. It then finally appeared when it was attacking a huge herd of Centrosaurus.

Retrieved from "https://natural.fandom.com/wiki/Daspletosaurus?oldid=8897"
Community content is available under CC-BY-SA unless otherwise noted.