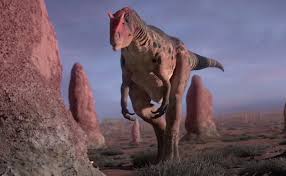 Allosaurus was a giant predator of the Jurrasic.

Allosaurus was a carnivore, hunting animals like Stegosaurus and camptosaurus. It was related to they large Carcharadontosaurus but was way smaller, than its cousin. It was 33 feet long, only 3 feet smaller than its rival, more famous carnivore called Tyrannosaurus. It has horns on it's eyes. Allosaurus is a genus of large theropod dinosaur that lived 155 to 150 million years ago during the late Jurassic period. The name "Allosaurus" means "different lizard".

Allosaurus appeared in many different documentaries, like Walking With Dinosaurs and Planet Dinosaur.

Retrieved from "https://natural.fandom.com/wiki/Allosaurus?oldid=8895"
Community content is available under CC-BY-SA unless otherwise noted.